I’ve put together a spreadsheet to help me with this choice. Maybe you’ll find it useful.

Disclaimer: I haven’t checked the spreadsheet carefully, so I can’t guarantee it’s error-free.

Earlier this week Joe Hockey made a speech to the Sydney Institute titled In Defence of God. In the speech he called for, at the risk of oversimplification, a more liberal theology of God.

Today’s letters page in the Sydney Morning Herald has a section devoted to this topic. It’s good to see that biblical theological views of Scripture are so well represented.

What's wrong with this picture? 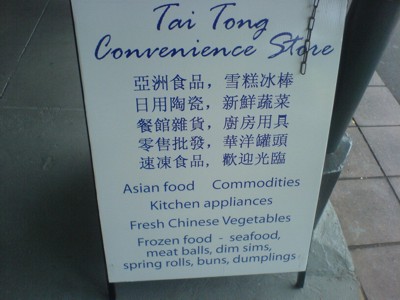 I wonder what sort of commodities you can get from this store? Gold? Iron ore?

At the SCCCA training workshop a few Wednesdays ago, Tom Tokura led a really useful workshop on evangelism.

He has kindly shared a copy of the presentation. Hopefully you will find it as useful as I have.

Fascinating web site on how to use Ikea furniture to do other things.

Recently my LaCie Ethernet Disk Mini failed to switch off. A quick search around the Internet suggests that the power supply had to be replaced.

Now the appliance requires a special power supply which costs about $50 to replace. This is too expensive, so I rather void the warranty and try to recover the data on the drive myself.

The Ethernet Disk Mini is essentially a standard ATA hard disk, coupled with a firmware running on a variant of Linux. Opening up the casing revealed that the disk uses a standard Serial ATA interface. (Some older disks may still be using a Parallel ATA interface.

So far, so good. I disconnected the drive from the casing and connected it to my PC. The next challenge was to discover how the data is stored on the hard disk.

The hard disk is divided up into 5 or so partitions, with one of them holding data, and the remainder holding the firmware and the Linux swap partition.

Originally I thought that the data partition was formatted as a FAT32 partition, but I was mistaken. It turned out that the more recent Lacie drives are formatted using the XFS file system.

Windows can’t read data from XFS file systems, which meant I had to somehow install Linux to read the data. Although quite involved, the instructions provided by polishlinux.org on installing coLinux on Windows did the trick.

And now I have all the data restored, and a spare 500GB SATA hard disk!

Kronos Quartet is a string quartet that specialises in “new music”. A few years ago they did a rearrangement of Sigur Ros’ Flugufrelsarinn, from their second (and apparently much acclaimed) album agaetis byrjun, as an encore piece for their concerts. They have now released it as a single titled Kronos Quartet plays Sigur Ros.

I have a copy of agaetis byrjun and I really liked most of it. (I must admit I have unusual musical taste.) Flugufrelsarinn was one of my favorite songs from that album, and Kronos Quartet’s rearrangement was excellent. There are more details on the rearrangement from the Kronos Quartet web site.

It’s really nice. You should try it. Available from iTunes

As a (hopefully temporary) PAYG instalment taxpayer, I noticed that the Australian Taxation Office has started a trial for accepting payment of tax bills via credit card. This means that if your credit card is linked to a rewards system, you may be able to earn rewards just by paying your tax.

Sadly, there is a catch. There is an additional card payment fee which is charged for credit card transactions–up to 1.02% currently. Boo.

As you would probably be aware from all the advertising going on, McDonald’s Australia has been promoting a series of Value Picks menu items.

This is confusing to me—it looks like the Deluxe Cheeseburger costs more than a regular Cheeseburger. If this occurs in the financial markets, then there would be fascinating arbitrage opportunities.

Many of you would probably be aware of the recent Four Corners coverage of an incident some time ago involving members of the Cronulla rugby league team, including Matthew Johns. Johns and his wife gave an interview to Channel 9 shortly after the Four Corners report was aired.

A “natural” deception expert recently did an analysis of the interview. Fascinating reading.